House Of No More 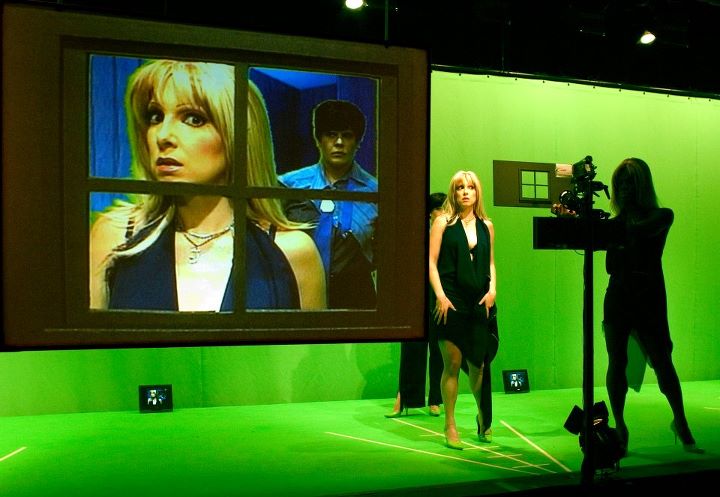 House of No More is the third and final part of a conceptual trilogy of Real Time Film begun with the works Shelf Life and Flicker. The performance starts with the reenactment of a crime told by a mother who thrusts herself on screen in her quest for her missing child. But simultaneously as this premise unfolds, the performers develop an antithesis– that the story is being faked as it is being created, dispelled at the same moment as it is conjured. As the characters dissolve into this corrupt transmission, becoming ghostly and multiplied across the surface of the “film,” what emerges is not a battle for the ownership of an absolute truth, but a thirst for a satiating lie.

The story of House of No More, as with all the parts of Real Time Film, is not told through the devices of conventional dialogue and narrative, but across an extended field of meaning in which the method of delivery contaminates the message. The image contradicts phrases, sounds obscure dialogue, the audience chooses what to see. The performance escapes across bounds: from creator to receiver, instigator to voyeur, it moves through states of being with an alarming and contemporary facility.

“Constructed as a breathless and disquieting narrative, Big Art Group’s House of No More is a spectacle as challenging as it is original, as freaked out as it is dazzling, far beyond traditional schemas and classical conceptions.” – Midi Libre

“on the bleeding edge of video technique.” – New York Sun

“The show is raw and caustic even as it remains sleek and professional. ” – Theatre Mania

“House of No More takes theatre into the 21 century by marrying art house film with classic theatre; it’s a 3D movie you won’t need glasses to view” – Next Magazine

Rockefeller MAP Fund, The DNA Project, a program of Arts International, made possible through the generous support of the Andrew W. Mellon Foundation, The Greenwall Foundation