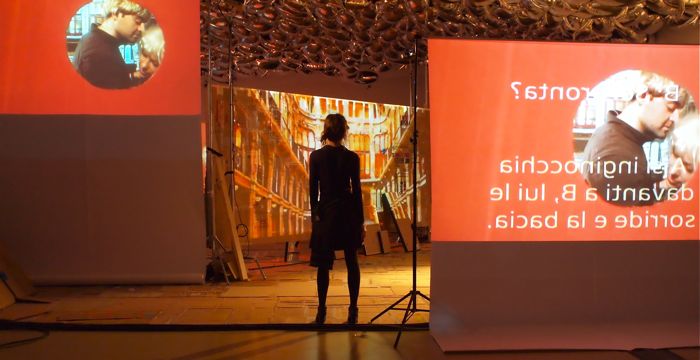 CITYRAMA is a performance created by Caden Manson / Big Art Group in collaboration with the students of HKB and the Teatro Stabile of Torino, installed and performed  at the Castello di Rivoli. CITYRAMA comprises a site-based theatrical and video installation that functions as a performance machine, asking the actor/participant to respond on stage to a flood of stimuli and make split-second responses in the context of a fragmented live movie. Multi-threaded stories, overlapping emotions, and conceptual actions that call attention to the physical occupation of the space combine into a portrait of the living city, of the city as a chimera created of voids and images, human stories and architectural constraints. In the interplay between occupation and transformation, CITYRAMA revels in the struggles of the ordinary hero to create her own world.