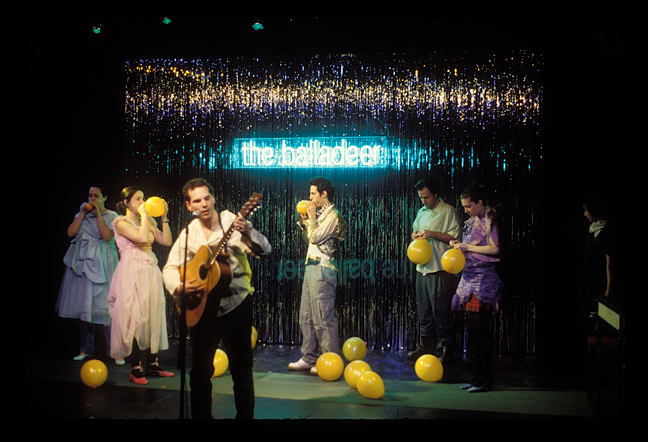 Mixing song, text, puppetry, dance and vivid, cinematic direction, The Balladeer tells a freeform story of new love and its defeat. The piece becomes a backdrop for an exploration of identity, anguish, desire; by turns empathetic and vulgar. In an ‘adolescent’ work that led directly to the technique of Real Time Film, Big Art Group mixes filmic and televisual ideas with theatrical form to create an unnerving, bizarre hybrid.

“the company continues to deliver on its promise to “aggressively attack the boundaries of theatre” in a most unusual way- with intelligence, talent, humor and a refreshing lack of pretentiousness.” – Next

“A high school dance becomes a backdrop for an intelligent exploration of identity, anguish, desire. Affecting and funny in its vulgar way.” – Village Voice

“…a worthy candidate for cult status, unfolding like a downtown theater version of a midnight movie.” – Matinee Magazine

“Manson is out to challenge propriety in every way he can.” – Citysearch.com